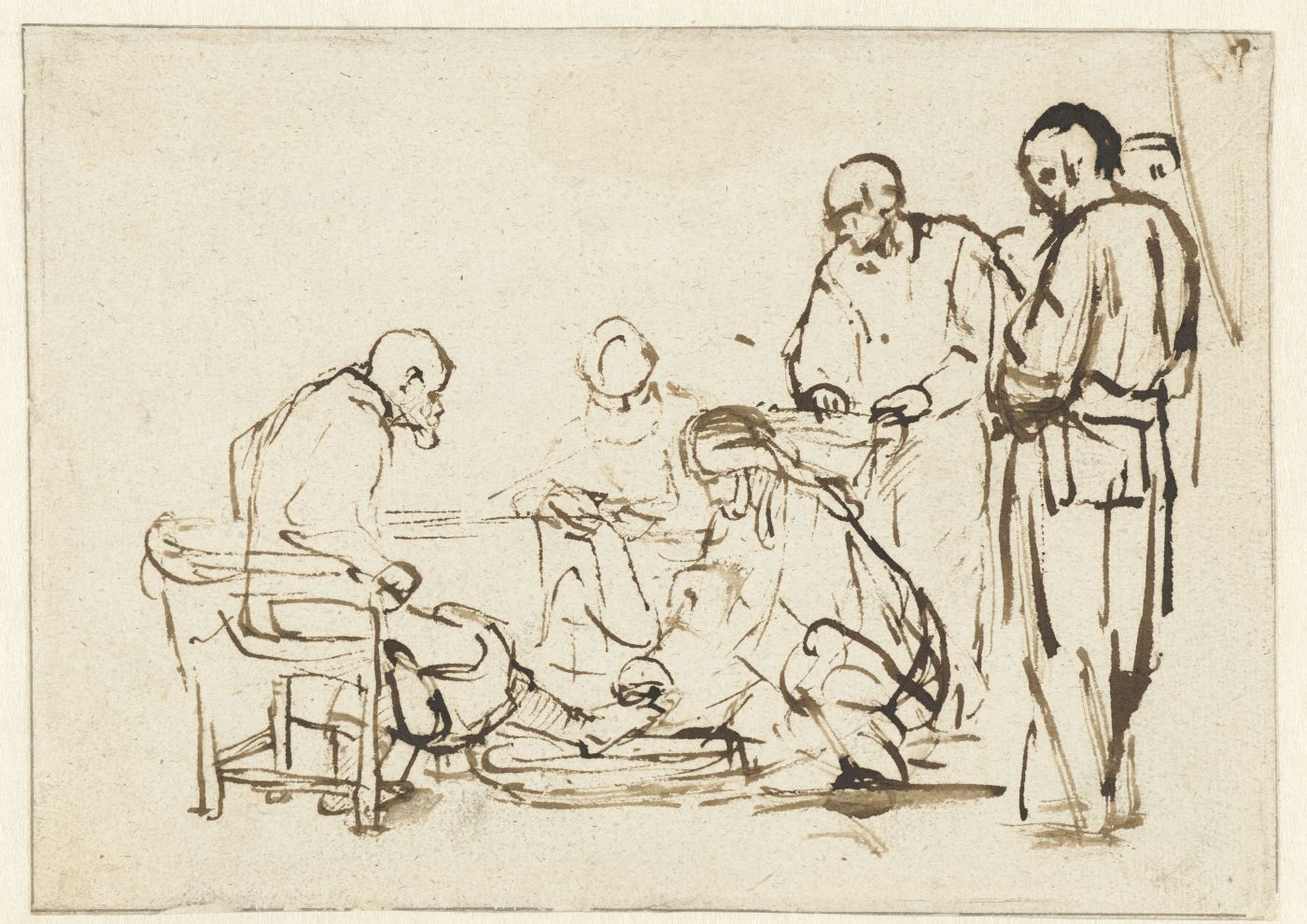 On the evening of Love, speaking without parable,
Jesus said: “If anyone wishes to love me
All his life, let him keep my Word.
My Father and I will come to visit him.
And we will make his heart our dwelling.
Coming to him, we shall love him always
We want him to remain, filled with peace,
In our Love!…”

Featured image: This drawing by Rembrandt van Rijn of Christ Washing the Disciples’ Feet was executed by the artist in Amsterdam, circa 1640–1650. His technique was reed pen and brown ink, with some areas deliberately rubbed with a wet finger or wet brush; he created the framing line in greyish-brown ink.

Christ is crouching in the middle of his apostles and washing Peter’s feet above a low round bowl. According to the biblical account (John 13:8-9), when Peter objected to Christ humbling himself in this way, Christ said that if Peter would not let himself be washed, he could have ‘no part’ with him, to which Peter answered: ‘Lord, then not my feet only, but also my hands and my head.’

Peter’s protestation and his lack of understanding of Christ’s superior humanity (expressed by his humility and willingness to do such a servile task) can clearly be seen in his pose: he leans forward in his chair, gripping the arms and craning his neck forward, still somewhat astonished. The other apostles, of whom only three are portrayed, are looking on. Christ was not represented in the usual kneeling position, but in a squatting pose that is more natural than respectable. In his portrayal of the story, Rembrandt limited himself to the figures; the only indication of the setting is at the upper right, a curtain drawn with a single reed pen line. The figures and the expressions on their faces are well characterized, even if not rendered in precise detail. This work shows the extent to which Rembrandt was able to use abstract forms to express emotions in a highly-individualized manner. The dark contours of the leg and back of Christ were added atop an earlier, faintly drawn sketch to clarify and improve the forms. Like the curtain, the standing figure to the right is drawn in very broad lines with a half-empty reed pen: reed nibs typically split from the pressure of the draughtsman’s hand, and this is evident here in the gaps in the middle of some of the ink lines, such as in the figure’s lower legs.

There is an earlier drawing of the Christ Washing the Disciples’ Feet, from circa 1628-29, in the British Museum in London (inv. no. 1961,0708.2), which shows more apostles. On the extreme left is a seated apostle, looking on, whose pose is similar in every detail to that of Peter in our drawing. Rembrandt must have used this figure of an apostle as a model for the figure of Peter in the later Amsterdam drawing.

A painting by Rembrandt of the subject is mentioned twice in seventeenth-century inventories: once in 1660, in the inventory of Abraham Jacobsz Graeven, and then two decades later, in 1680, in the inventory of Harmen Beckers, where it is called a ‘graeutie’, in other words, a grisaille. Although a painting of the Christ Washing the Disciples’ Feet in The Art Institute of Chicago (inv. no. 1934.385) has been connected with the painting in the first inventory, it is not an autograph work and is currently attributed to Jan Lievens (though not accepted as such by Bernard Schnackenburg), datable circa 1630-35. The British Museum drawing probably dates from the same period or earlier. When compared to the other works, the Amsterdam drawing is the most monumental and impressive. Though it was previously generally assigned to the 1650s, its vigorous drawing style, full of contrast, makes a dating in the late 1640s more likely in my opinion.