Today’s first reading (1 Kings 19:4-8) tells us about the prophet Elijah, who one day is filled with fear and goes to the desert because, disappointed in himself, in religion, and in the society in which he lives, he wants to die: “But he himself went a day’s journey into the wilderness, and came and sat down under a solitary broom tree. He asked that he might die: ‘It is enough; now, O Lord, take away my life, for I am no better than my ancestors’” (1 Kg 19:4).

The previous verse tells us why Elijah decides to go to the desert and wants to die: “He was afraid; he got up and fled for his life” (1 Kg 19:3). He had made a great effort for years to show the people the true face of God; he had committed himself completely so that the people of Israel would keep the faith intact against the religion of the false god Baal and defend the poor against the acts of violence and injustice of King Ahab and his wife Jezebel, the royal couple who ruled at that time.

Elijah was a great prophet, a man of God, and a giant of the faith.

After having defeated the false prophets of the queen, unmasking the religious deceptions of the royal couple with which they dominated the people, and having denounced the great acts of injustice they committed, the queen had persecuted him and threatened to kill him. The prophet is afraid and runs away. Nelson Mandela said that “the brave man is not he who does not feel afraid, but he who conquers that fear.”

Even the great men of God can suffer moments of crisis and fear, as in this case with the prophet Elijah, who flees in fear before the threats and persecution of the powerful Phoenician queen Jezebel who ruled at that time in Israel. A prophet of God was running away from a soulless woman, whose will was supposed to be the law; who was the manipulator of religion; she who was the unjust and violent one. The prophet is afraid and flees to the desert.

The prophet’s crisis, however, becomes a moment of grace because God approaches him in the desert and feeds him, giving him new strength to live.

Elijah goes to the desert, lies down and goes to sleep. He’s just waiting to die. The fact that Elijah lies down and wishes for death shows the drama of the moment he is experiencing: “It is enough; now, O Lord, take away my life, for I am no better than my ancestors” (1 Kings 19:4).

Like so many other believers in the Bible, Elijah complains before God and goes on about the weariness of his life, the fatigue of the struggle, the temptation to make the final withdrawal. All that remains is to throw in the towel; everything has been useless. He has probably experienced that his prophetic ministry and his efforts to fight against Baalism and against the injustice of the system in Israel have proved to be of little value.

In reality, nothing has changed and now his life is threatened.

And further, now Elijah is afraid. The powerful queen has intimidated him and threatened to take his life. To dominate others, fear is the most effective instrument. It is the preferred weapon of oppressors. Fear leads Elijah not only to run away but also to fall asleep. Falling asleep is to remain unconscious, in a certain way: it’s an escape from reality.

However, when things turn dark; when what’s transpired becomes indecipherable and the future, uncertain: that’s when we have to be wide awake. We must not turn off the light of conscience and discernment, for that is when we must be more clear-headed than ever. Poor Elijah. Defeated. Full of fear, running away from Queen Jezebel, running away from reality, and running away from himself. 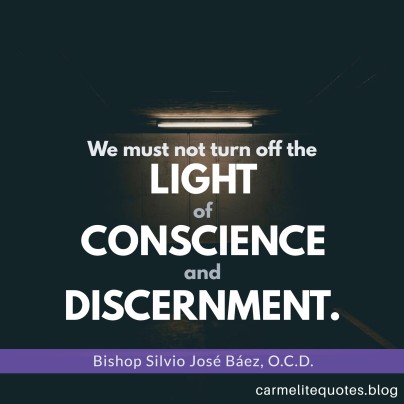 The biblical story tells us that Elijah was awakened and fed by God, because God doesn’t want anyone to be asleep and fearful. Precisely at the moment of the greatest darkness and fatigue is when the prophet turns to hear the word of the Lord through an angel, saying two times: “Get up and eat” (1 Kings 19:5).  After eating the first time, Elijah goes back to sleep. Sometimes the crisis is so great and the discouragement is so strong that it is difficult to get up and walk.

God is not overcome by our weakness

God insists for the second time in feeding him: “Get up and eat, otherwise the journey will be too much for you” (1 Kings 19:7). God doesn’t want us to feel fearful, neither does he want us to sleep. That is why he feeds the prophet, as he feeds all of us when we feel fallen, frustrated, and hopeless. God makes the boundary seem like it becomes a new horizon; what is experienced as death is transformed into the beginning of a new life.

God offered Elijah—through his messenger—frugal and simple food: a pilgrim’s meal (“a cake baked on hot stones” and “a jar of water”, 1 Kings 19:6). At that moment you don’t need a succulent feast, but effective nutrition. That kind of effective nutrition to recover strength and hope, only God can provide. Elijah ate and “he went in the strength of that food forty days and forty nights to Horeb the mount of God” (1 Kings 19:8).

Before eating, the prophet’s flight was headed toward death; after being fed in the desert, that miraculous meal takes him to Mount Horeb or Sinai, where Moses met the Lord, where Israel first made a covenant with its God. God began everything on that mountain. Elijah goes to that mountain—where the whole history of the covenant started—to begin again, renewed by God’s strength, and to be able to continue as a man, as a believer, and as a prophet.

We who are living in the current drama of our society† know about the injustice and arrogance of the powerful, the manipulation of religion, violent repression, and the use of fear as a form of domination. All of these shady schemes are opposed to God’s plan.

Elijah fought against all of this. He gave everything. In the end, in self-imposed exile, escaping to protect himself from the death threats of Queen Jezebel, he falls down, tired and hopeless, in the desert. He was tempted not to keep fighting, dreaming, and hoping. It can happen to anyone. 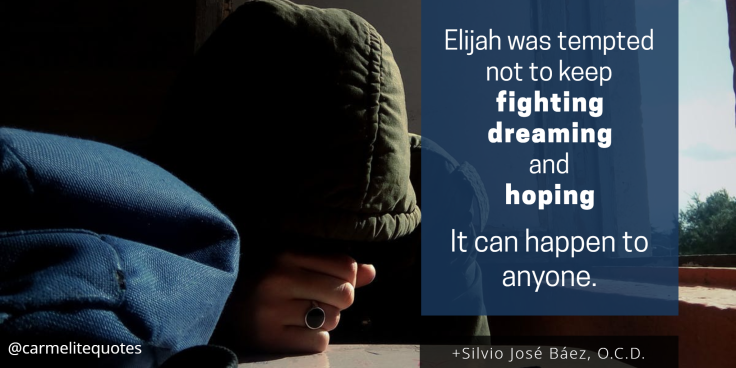 The biblical text, however, gives us the certainty that God’s nourishment allows us to come out of our unconscious state and overcome fear—not letting anyone deprive us of hope—to keep moving forward to build a freer and more democratic country. The bread that God gives us in the desert is more powerful than the wiles and threats of the shadowy structures of oppression and death.

We have the right to dream of a Nicaragua without rulers who oppress the people, where the dignity and rights of every person are respected, where we put off particular interests to share our goods and concerns in peace and justice, and where dissent from power is not a crime. 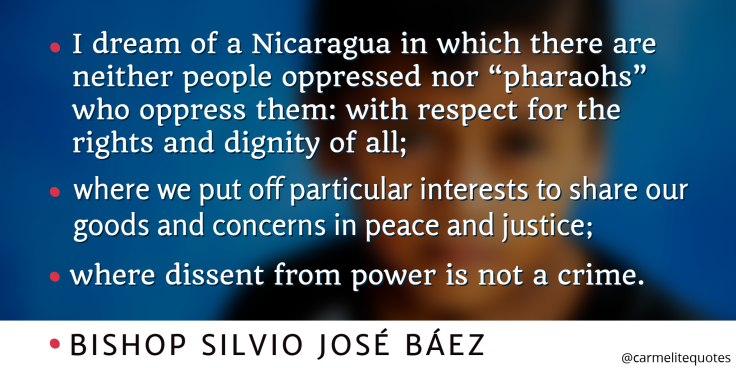 Today, too, we need a bread that is mysterious and effective, that allows us to walk with strength and hope.

That bread is Jesus, who today has told us: “I am the living bread that came down from heaven. Whoever eats of this bread will live forever” (Jn 6:51). Jesus offers to nourish us so as to give us strength, light, hope, and the breath of life that come from the same God, the creator of life.

If Jesus nourishes us with his love and kindness, with his light and with his strength, nothing can take away our joy and hope. In our interior, in the depths of our heart, God feeds us with his Son, the Bread come down from heaven.

We have heard Jesus today who told us: “No one can come to me unless drawn by the Father who sent me.” The Father mysteriously draws us to Jesus; he makes Jesus attractive to us. And if Jesus presents himself again to us—attractive, fascinating, familiar in the depths of our being—we are attracted to the good, the beautiful, the noble; we will prefer honesty instead of corruption, truth instead of lies, peace rather than violence.

If Jesus makes us attractive, we will be fascinating and attractive, which does good for the human person—which builds a better world.

4 thoughts on “Elijah: Fear and Hope”